Baghdad_Women_Association staff at the Social Listening and Counseling Center in Mosul implemented four social support sessions for 12 beneficiaries of men and boys inside the center during July within the framework of (Promoting the Well-being Dignity and safety of conflict affected SGBV Survivors) Project, funded by NPA.

At the beginning of the sessions, the center’s services were introduced, then talked about the participants ’perception of women in terms of rights and equality, sharing ideas and opinions about their support for the work of women and giving them their rights and freedom of expression, while others rejected the idea by virtue of customs and traditions and it was discussed in that and clarifying the positive aspects of women’s work and support for men as well as focusing on the concept Violence and its types and what are the motives behind the violence and who are the most victims of violence, when one of the participants mentioned: “Violence and beatings are a method of discipline and a man has the right to hit his wife.” This opinion created a debate among the participants, as most of them rejected this idea, and another said: “I do not want to be like my father and violate my wife and my children as the violence I was subjected to because of him still effects my mental health.” 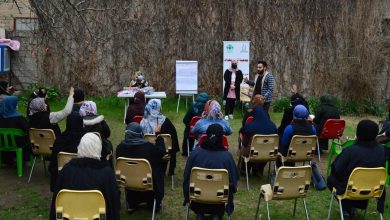 Awareness sessions for 64 women and girls