#Baghdad_Women_Association staff at the Social Listening and Counseling Center – Mosul implemented nine awareness-raising sessions for women and girls about domestic violence during Coronavirus crisis, reproductive health and early marriages, five of these sessions were implemented in the center while practicing precautionary measures and social distancing, the other four sessions were implemented online via Messenger App during July 2020, within the framework of Promoting the Well-being Dignity and safety of conflict affected SGBV Survivors( Project, funded by Norwegian People’s Aid.

The awareness-raising sessions were attended by 110 women and girls aimed at raising their awareness about domestic violence, how to reduce its effects and the negative impacts of early marriages, and focusing on educating women about reproductive health.

The participated women expressed their joy by visiting the center again, as one of them said, “We missed you a lot and we were very happy to visit the center again.” They also shared stories about the marriage of minors and how it negatively affected the lives of girls, as one of the beneficiaries said “Before, I used to think a man who marries a little girl will treats her like his daughter, but now I discovered it’s actually the opposite” And another said “We have to let our daughters choose their lives.”

Awareness sessions for 67 women and girls 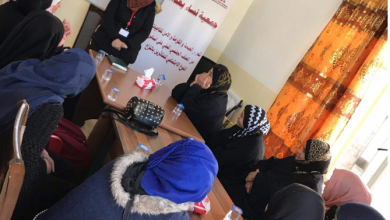 Advocacy Session for 13 women and girls

Awareness sessions for women and girls